Skip to content
Good luck to all in Cleveland this week at the Republican National Convention. I hope cooler heads will prevail, and peace is not destroyed by the extremists of any belief. 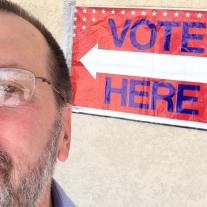 As I saw this week in online posts, there are people claiming to travel to Cleveland for the convention with their guns, intent on stopping at breweries and distilleries along the way to stock up on alcohol, so they can “stand up” to Black Lives Matter, and anyone else who disagrees with them.
That is exactly the kinds of sentiments and intentions that started the Civil War in 1861. Drunk men with guns who wanted to suppress blacks, perpetuate slavery, and tell the country how to govern itself was a losing proposition in that year, and it is a losing proposition in 2016.
Drunk men with guns is a bad prescription for peaceful democratic process. Guns are not the right objects to bring to political conventions, unless one is supporting violence.
Bring brains and logic, understanding and ethics, and yes morality that is based on helping others to your political convention. You want to make America great again? Bring back the middle class way of life. Bring back jobs for Americans. Bring back the dollars earned in the US that have been hidden oversees in banks to keep from having to pay taxes. Bring back the ethics and morality of freedom for all, and justice for all, not just for the wealthy, the whites, and the politically connected. That is what should be brought to this important American political gathering, and yet I understand it is probably not going to happen.
The party of Lincoln that freed the slaves by winning the Civil War is today intent on building walls, violating freedom of religion, and suppressing dissent. It seems intent on disenfranchising as many non-Republicans as possible through gerrymandering, restricting and unconstitutional voting laws. And the reason?
Drunk men with guns is my only explanation for this danger to the United States. Certainly, they could not hold those un-American values if they were sober.
– David W. Wooddell